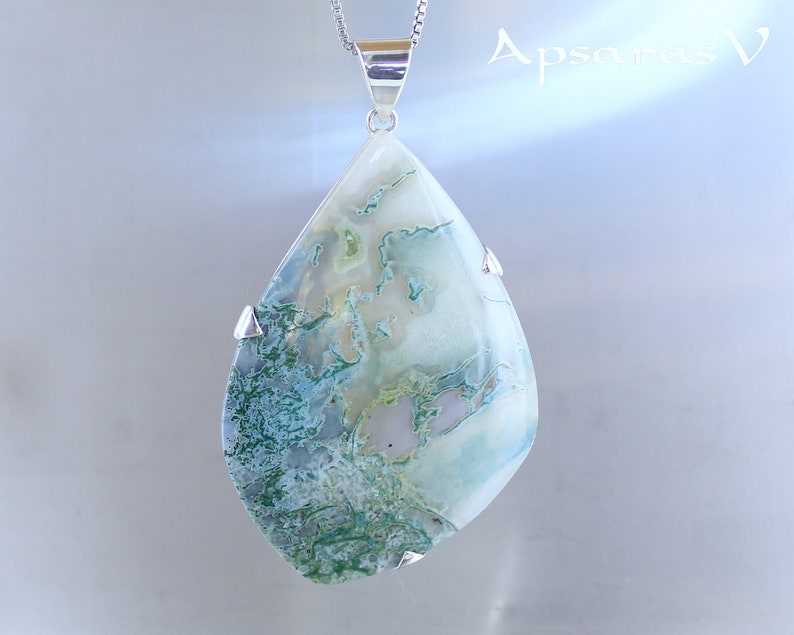 .Those Agates stones cause of they opaque and transparency inclusions looks like painting of aquatic landscape.

.The design of this Pendant is eclectic: modern, elfin, boho, minimalist
.For man and woman.
.Claws setting, solid and delicate.
.Moving loop

.All our stones are carefully and quality set, in solid silver frame without any gluing.
.All Our jewelry are original creations, manufactured entirely with the hand.
.Our Silver is only mix with copper (zero cadmium, nickel or all other dangerous components for health).
.ApsarasV make our jewelry high quality sign

.One of a Kind

.Please note: The silver chain isn#39;t included in the sell.

.We will send your order after 2 or 3 working days.
.Each articles will be beautiful presented in our name#39;s jewelry box.
.Ready to present.
.See more on: http://apsarasv.etsy.com

More About the amazing Agate stone :

Myths and legends around this attractive stone which is the Agate: “Relationship of the man with nature”, “protects from snake venom” “Calm the storm, protect from the Lightning”

Human liked the beautiful stories and often found heavenly origin for the fine and precious stones, mysteries which would justify their mystical powers.
The Agate counts some in the whole world:

.In the Middle Ages one tied Agates with the horns of oxen to obtain a good harvest. This rock was often related to the wire of the centuries to the relationships of the man with nature, supporting the generous growth of the plants of the garden, protecting from the bites from the snakes, the scorpion or insect bites. Placed in food or drinking water it would dissipate the disease, would look after insomnia and would protect the particularly fragile carriers like the children.

.The Agate is also related to Ceridwen, goddess Celtic of death and the fertility. It is queen of the occident, of water and of the autumn, it is the initiator of any magic and queen of the witches in Anglo-Saxon mythology

.The Romans associated Agate Aurora, to goddess of the paddle and to mother of the winds. She was also related to Bona Dea, goddess of the virtue and protective of the women, put out of powder and mixed with water it then has the power to fight against the venom of snake.

.The Agate was regarded as protective against the tragedies or the evil.
It was formerly a remedy to cure the punctures of scorpions, snakes and to prevent the contagion. It was also believed that it had an incredible power to calm the thunder and the lightning, to obtain the favour of powerful and to bring the triumph in the wars and the combat.

.The Egyptians believed that the Agates protected the carrier from the lightning. Placed in the mouth, they also conferred the power to him to seal thirst. A worked Agate and rise in jewelry, were judicious to return the person who carried it invisible.

.For the Persian ones, the Agate affected the natural elements, the magicians used it to divert the storms by making it burn.

.The Sumerian ones used agate while carrying it with other stones around the neck and the wrist to entreat the fates thrown by the Lamashtu Goddess threatening theborn ones.
In the Epic of Gilgamesh, it is known as that in the garden of the Gods, the dewdrops were agates…

.The Agate was revered since the Han Dynasty of the East of China (25-220) where the colours red were extremely appreciated, it would come from the brain of a fossilized horse. It was also judicious to come from the recrystallization of the blood poured at the time of the Yellow Emperor (2 500-2 600 avJ.C).
For the Chinese it is an exceptional jewel which helped to purify the spirit of the carrier, to instigate its chi and to create decisive moments in its life.

.The Agate is a stone which would be used to locate pearls. When the plungers want to find some, they attach an Agate to a cord and throw it in the sea, the agate is attracted by a pearl, and the plunger can follow the cord to the place where it is.

We find Agate it in the whole world, but one recognizes particularly those of Brazil, Egypt, Germany, India, Mexico, Nepal, the United States, Sicily, Uruguay and Canada.
This Moss Tube Agate comes from Oregon

How to clean and maintain its silver jewelry with a stone:

The jewelry tends to tarnish with the time which passes. That is not sign of poor quality but simply of daily wear. So that your jewelry preserves all its glare, they should ideally be withdrawn before the use of domestic products or cosmetics which tend to make tarnish the glare of metal and the gems, to avoid carrying them to bathe in swimming pool or at sea.

For the cleaning of your jewel it is preferable for your stone to banish the use of chemical products which would be likely (according to the stones) to cause damage.
Here process of a natural, nonaggressive and effective cleaning:

To deposit a little toothpaste on a brush with humidified tooth with flexible hairs, and to rub the jewel gently as well as the stone (not to forget the interior face) to make it shine of thousand fires.
Finish cleaning by polishing your jewel with a soft rag.

NB: The decorative elements present on the photographs are not included in the sale.

Hesperian Health Guides is a nonprofit health information and health education source that supports individuals and communities in their struggles to realize the right to health. We develop easy to read materials that are produced in many languages. All are available through our bookstore and the new SILK Crepe Ribbon | BLISS Pink | Handmade | Hand Dyed 2quot;.

By Title By Language 2.5-3mm Pink Peach Rough Diamond Box, Natural Diamond Cube, Raw
Hesperian Blog
This is a good news post.
9/06/2021
Labor Day 2021, as it was last year, is going to be very different from previous cele...

In the US, where doctors are available, what lessons can Hesperian's "Where There Is No Doctor" provide? This article published in 2019 by the @amjmed explores how principles from our renowned health manual can be used to change the ways doctors operate in America.