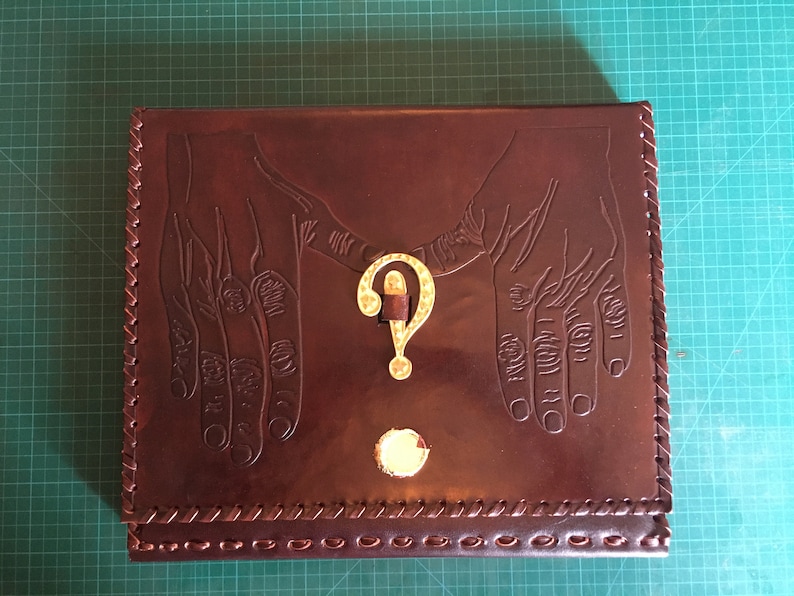 Goin’ on a Treasure Hunt …

One day a man set out to create a game, a treasure hunt…

More to be revealed anon, but before we begin, let’s take a look at the game from the outside, its external appearance and follow on with something of its context, something of the what and wherefore.

First let us look upon the Treasure Hunt’s outer frame. The game’s enclosed within a leather folder, to be opened by a metal clasp, an interrobang. An interrobang to open it ?! And what is that, you’ll likely hear somebody ask. And here’s an answer: ‘An interrobang is a binding that ties a question to an answer, a ligature of ‘ what’ to ‘that,’ of ‘cause to an effect’ ?!’ An interrobang’s the drawn breath and exhaled exclamation of a mental revelation, the ahah ?! moment of Galileo, gazing through his telescope, when he first sees the moons of Jupiter, or of Darwin, aboard the HMS Beagle, as he examines those Galapagos finches’ beaks.

In every treasure hunt you’ll likely come across a villain. There’s one of sorts herewith, not physical but comes in the form of a message from the many casuists who like to tell you that the universe exists only to make a fool of you, no matter what you try to do. The interrobang’s a reminder, tying grapheme to a glyph, a reminder of those moments that tell you that this simply isn’t so.

And now we’ll leave the treasure chest awhile, buried beneath the sands of some island hiding place, while we discuss some context on its genesis.

The name of the game is ‘Crown of Creation’ it is meant to be used as a bedtime story. The players of the game will be three members of a family, there is a mom, a dad and their child, the nuclear basis of civilization, and in this game, which is a game of life, the parents will be helping the child to play the game, coming together to solve puzzles, – but ultimately the focus is on the child, establishing first habits, what you do and learn is what you become, finding through play, answers to puzzles and the gift of rational thinking that will follow the child through life itself.

Concept behind the game. We sapiens are nature’s crown of creation, fitted through evolutionary development, large brain, complex language, conscious thought and dexterous hands, to uncover truths of nature in an interrobang opposing entropy, entropy that’s both physical and mental, which is homo-sapien’s enemy. Armed with nature’s gifts, what we do and learn we do become, that is our destiny.

What stands in the way and why this game? Humans live within a web of culture. Those individuals who made those hand imprints on the walls of the Lascaux Caves, first conscious mark making in the historical record, ‘I am here,’ were also part of a group, as we, members of tribes, associations, nations, live in societies with pressures to conform according to accepted rules and mores.

And since we learn from that which we repeatedly observe, I’ll repeat, an observation by Michel de Montaigne regarding the tyranny of custom:

‘Nothing so outlandish,’ said rational pessimist, Montaigne, ‘that cannot be demonstrated in public practice somewhere in the world.’ And those customs, ‘from some gentle beginning, unperceived, unmask a furious and tyrannical countenance, against which we have no more courage or power so much as to lift our eyes.’

Cultural conditioning. Say, having the good fortune to be born in a certain time and place that’s relatively open to individual development has ever been the luck of the draw. Through history, some cultures have emerged that are more enabling to rational thinking than others. Compare Sparta’s tribal society, where institutions were given taboo status as gifts of the gods, to 5th century BC, Athens’ emerging democracy, and its citizens who dared to question what and how? Being a member of a maritime society is helpful, observing many cultures and recognizing that institutions are made by man and therefore alterable … Greek dramatists writing drama about political and social issues, Socrates developing modes of critical argument, Aristotle developing tools of logic, ways of recognising and eliminating contradictions that hinder enquiry, these were major steps for human kind.

Great movements in civilization but soon under attack. Enter your gurus who want to remake and control society to their own plan, and always an authoritative plan. Greek oligarchs and Plato, he’d use the democratic Socrates as his sock puppet, distorting his logical arguments on liberty and justice to artfully produce their contrary, processions of philosopher kings, religious shaman and kings who rule by divine right, right up to today, enemies of open society like George Soros and those authoritarian, globalist activists of the United Nations, ( producers of fnords, look them up if you don’t know what they are) who would rule us from afar. Technology, internet, universal education should be enabling to open society, but as in George Orwell’s dystopian ‘1984’ they’re being used by guru groups to propagandize and take us back to feudalism.

And that’s your broadest context for something valuable you’ll find concealed within that treasure chest still buried beneath sand on some unknown beach. And so herewith, let the game begin!

The game and its treasure.

And what we have in the Crown of Creation Treasure Hunt is a user’s manual for a child on how to become a rational thinker, based on Aristotle’s three powerful laws of logic, laws that eliminate the mis-directions of contradiction in thinking and argument. And the child will be able to explain it completely, as nobody has done for 2000 years.

Sadly the child won’t get this practice at school but now he or she will get it from mum and dad, in a game that helps the child to self-possession, to becoming what nature has endowed him or her to be, nature’s Crown of Creation.

A brief digression on self-possession. What is it? Self explanatory that it is ‘self-ownership.’ The definition of ownership: ‘exclusive,’ ‘yours,’ and ‘no one else’s. – not to be controlled or taken over by uninvited house guests. But what is ‘the self?’ Well first, the self is a human self, ‘human’ distinguishing characteristics, ‘big brain, language, by which the human being defines himself or herself.’ Socrates ‘know thyself,’ a process that’s recursive and not circular. You get to choose, not some puppet master.

Recursive thinking. You find it in great literature, Shakespeare’s protagonists, Jane Austin’s heroines, reflecting on experience and on their own actions and motives, then possibly changing behaviour as a consequence; that’s ‘self possession.’

In the Crown of Creation user manual, the first law is the Law of Identity, A = A ,
A is not non A Everything is itself and not something else. With that established no way can you be persuaded by some Hegelian dialectic that slavery is freedom or justice is its opposite.

The next law is the Law of Contradiction. For all propositions A, it is impossible to be both A and non A at the same time. So many ways to argue that ‘there’s no such thing as truth you know, I swear that this is true, the universe exists to make a fool of you.’

And then there’s the Law of the Excluded Middle. A statement has to be true or it is not true, it is a binary opposition, a statement cannot be some other thing. If it can’t be substantiated then it doesn’t exist. The null set is an empty set and therefore false. This eliminates the mysterious and the superstitious in one fell swoop.

And gone, too, all those tricky liar paradox arguments and apparitions of excluded middle that confuse, dehumanize and weaken you. Quest for truth, wielding your logic armoury, reaffirmation of reality enabling joy of discovery. That is the treasure!

How it works. Three puzzle sheets, images and verses.
For adults who encounter difficulties there’s an accompanying lesson plan, my suggestion, as guide to steps for solving every puzzle, and finally a treasure map where the words uncovered in the puzzles will tell you where to ‘dig.’

Artifact treasures are also to be found, the Darwin award for getting it right, a silver coin, powerful and positive imagery on either side, that children will assimilate unconsciously, a ring to wear, one ring to free them all, embossed with three hands from the Lascaux Cave wall, hand prints of mother, father and child. The book is leather bound, with pages of archival canvas and printed with ink of 200 year permanence. It is meant to be an heirloom and serve a family for generations. For the children there are hidden sheets to be uncovered in free play, a bestiary of beasts, images and verses like Lewis Carroll’s Jabberwock, so that they’re imbibing protection, as they freely play, against the classic illogical spinners and fnords that sophists use to try and show you that you’re incapable of thought.

So let’s end with a quote from a philosopher, Will Durant, The Story of Philosophy:

Excellence is an art won by training and habituation: we do not act rightly because we have virtue or excellence but rather because we act rightly these virtues are found in man by doing his actions, we are what we repeatedly do. Excellence is not an act but a habit.

Logic habits are for making you unbreakable. That’s it!

NOTE: This listing is only for the set of the crown of creation game book and the lesson plan..

To purchase the ring please visit the link:
https://www.etsy.com/in-en/listing/795537529/embossed-lascaux-cave-wall-hand-print?ref=shop_home_active_1frs=1

Brock Purdy has his pass deflected and then tips it himself to Mario Goodrich in a wild sequence of events that ends in an 18-yard Clemson touchdown.

Dabo Swinney gets a glorious Cheez-It bath as Clemson seals a 20-13 win over Iowa State in the Cheez-It Bowl.

Brock Purdy completes a pass to Charlie Kolar in the back of the end zone for an easy 6-yard Iowa State touchdown.

Will Shipley follows his blockers and gets to the outside to score an easy 12-yard touchdown to give Clemson a 13-3 lead.

D.J. Uiagalelei rolls out to his right to fire a pass to Beaux Collins that he somehow tips and catches in a crowd of defenders.

Chelsea looked prime to win against Brighton before a late goal by Danny Welbeck doomed them to a 1-1 draw at Stamford Bridge.

Once again, the title is Manchester City's to lose, but this season, they've managed to reinvent themselves and get even better. So what's changed?

Chelsea were imperious for the first 10 months of Thomas Tuchel's reign. The crown has slipped, though, and he needs to figure out why -- fast.

John Madden died on Dec. 28 at the age of 85. We took a look back at how the legendary coach changed the sports we watch -- and how we watch them.

Two years into the COVID-19 pandemic, scouts have adapted to analytics and less travel, while clubs focus on low-risk signings and saving money.

Toronto FC is ready to retool under new manager Bob Bradley with a pair of stars from Serie A. Transfer Talk is LIVE with the latest.